In one of those eerie "out of the blue" coincidences, I found myself thinking this morning about Aaron Swartz (wikipedia.org). It turns out today was his birthday: November 8, 1986.

Many of us know of Aaron as one of the members of the RSS-DEV Working Group which created the original RSS spec: RDF Site Summary (RSS) 1.0 (resource.org).

He created or was otherwise involved in a staggering number of organizations including OpenLibrary.org and CreativeCommons.org, cofounded Reddit, and wrote brilliantly about a variety of topics.

Aaron was 26 years old when he took his own life. He was facing up to 35 years in federal prison for downloading large quantities of academic journals from JSTOR ("Journal Storage") (wikipedia.org) to a laptop computer in a closet at MIT. JSTOR is a nonprofit organization. In other words, a "legal entity organized and operated for a collective, public or social benefit." Much of JSTOR’s content is publicly funded research.

Early on, and to its great credit, JSTOR figured "appropriate" out: They declined to pursue their own action against Aaron, and they asked the government to drop its. MIT, to its great shame, was not as clear, and so the prosecutor had the excuse he needed to continue his war against the "criminal" who we who loved him knew as Aaron.

The post-Reddit era in Aaron’s life was really his coming of age. His stunts were breathtaking. At one point, he singlehandedly liberated 20 percent of US law. PACER, the system that gives Americans access to their own (public domain) case-law, charged a fee for each such access. After activists built RECAP (which allowed its users to put any caselaw they paid for into a free/public repository), Aaron spent a small fortune fetching a titanic amount of data and putting it into the public domain. The feds hated this. They smeared him, the FBI investigated him, and for a while, it looked like he’d be on the pointy end of some bad legal stuff, but he escaped it all, and emerged triumphant. 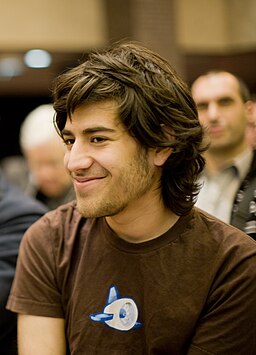 (Photo by Fred Benenson, CC BY 2.0, via Wikimedia Commons)