I had a dream

Time for a new setup!

Welcome to "setup2". Don’t bother looking for a "setup1" page. There isn’t one. But there was a previous setup: a Syncthing-managed ~/sync/ dir that lived in my home directory on all of the POSIX-compatible machines I use semi-regularly around the house.

One machine to rule them all 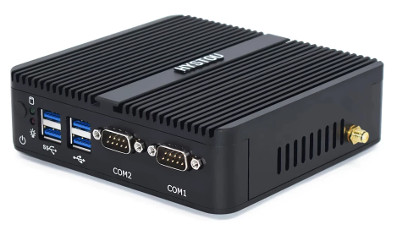 The cornerstone of the new setup is a fanless mini PC running a low-power Celeron (N3160) processor with 4Gb RAM. It it always on and uses about 5W just sitting there (less than a household LED light bulb!), which I can live with. Main storage is the 60Gb NVME SSD card that came with the PC. (I also have an external USB SSD plugged in for bulk storage, but only use that ocassionally).

It’s headless and lives in the basement, though I can plug a keyboard and monitor into it if I have to for some reason.

Rather than keep synced "perfect" setups across multiple machines, the idea is that I now have just one perfect setup on this one machine. To go to my "true" home to edit my wiki, etc. I SSH into this machine. (And a web server can be an amazing thing to have on your local network if you are creative with it.)

It is called Phobos because it sounds cool and gives me happy DOOM-related memories.

Okay, so I’ll SSH into Phobos as much as possible to keep a simple, secure "home" for myself. But I’m still going to want a consistent environment (such as settings for Vim and Bash) and a common personal ~/bin/ directory for my most used scripts.

I could continue to use Syncthing for this. But here’s my issue:

I had my dotfiles and bin under version control. But since I only used it as a sort of backup mechanism, I only committed to the repos "whenever I felt like it", which was pretty rare. Also, conflicts between edits on different systems were rare, but when they did happen, Syncthing couldn’t help much to resolve them other than silently put a conflict file in the directory.

So this time, I resolved to go "all in" on sharing between computers via Git repos. This is done with "bare" repos, which I’d always avoided because I didn’t understand them and they seemed redundant on a local system like mine.

Turns out bare repos are nothing to fear and it’s quick and painless to set up the ability to serve a repo from a central "server".

On the "server" (in my case, Phobos) create a bare repo from existing local repo foo with:

Set the upstream for the local repo on the "server" (Phobos):

Now on the "server" (Phobos), you can push and pull from the foo repo locally. The server is done.

Then on any other another machine on the network, clone it from the "server" (automatically sets upstream):

(In the above example, the /home/dave/repos directory exists only on the Phobos computer. Note also that I’m user dave on all of my machines. Otherwise, I might need dave@phobos…​.)

Now I can push/pull from the cloned repo on any machine (including the server Phobos) to the "bare" repo and keep everything in sync.

If you’ve shared setups across multiple Linux/BSD/UNIX machines for a while, you know the "dotfiles" issue: how do you quickly and painlessly "install" files such as .bashrc, .vimrc, and .ssh/config across computers without losing your mind?

You can see a lot of solutions for this problem on github.com. I had my own dotfiles/setup.sh to do this (it created symlinks).

But I really like the philosophy of using older, general purpose tools whenever it makes sense.

GNU Stow was created to solve a different problem in 1993: managing symlinks to software packages. These days, it’s found a new purpose: managing symlinks to people’s "dotfiles". Most distros seem to have a Stow package available, so it’s just an install away (in my case, Slackware has a slackbuild; Alpine and Debian both have "official" packages).

The key to understanding Stow are these principles:

This is best demonstrated with an example:

To install the above "vim" package:

And then the "ssh" package:

Now what’s interesting with the above ~/.ssh symlink is that every machine needs its own separate ~/.ssh/known_hosts file (you could share them, but that would be horrendous to manage). At first, I solved this by mkdir .ssh && touch .ssh/known_hosts and then running Stow. That works because Stow is smart enough to see the existing directory and only create symlinks for the individual files inside.

But then I realized that it would even easier to let every machine just go ahead and write to its local copy of the symlinked stow directory (~/dotfiles/ssh/.ssh/known_hosts). How would that work when dotfiles is a shared Git repo? Easy! Just add known_hosts to the .gitignore file. Now every machine can write to a separate known_hosts in the stow repo without the repo being bothered by it at all.

My current .gitignore in the dotfiles repo:

As you can see, .gnupg also has a file, random_seed which should not be shared between machines.

Of course, if you’re like me, your various computer setups are only 99% similar, not identical. I’ve taken to using the hostname of the computer in my scripts to do additional things. It works really well.

Setting up a new computer

Now I just need to install Stow (note that sbopkg is Slackware specific), get my dotfiles repo, select which items to have Stow manage and I’ve already got most of my stuff available:

I let stow manage my .ssh info and I find that I need to manually correct the permissions for these files. I’ve got a script to do that. Then I test my 'p' ssh config alias for phobos:

Now I can clone other repos (my home bin/ dir being the most important, of course) and test out the stowed Bash profile/rc:

And Vim needs my plugins installed. I’ve got this at the top of my .vimrc:

That’s it. A new machine all set up in as little as 5 minutes after reaching a command prompt!

The advantage of something like Syncthing is that it is always working on your behalf. I wondered if remembering to make my manual commits, pushes, and pulls was going to be a problem?

I think I’ve just solved that! It’s hardly perfect, but I’ve created a checker that I run every time I log in. I put it in my .bash_profile script:

It tells me which local repo has uncommitted changes or needs to be pushed or pulled.

Output is as simple as

I’ve put the entirety of the script at the bottom of this page. See check-repos below!

Time will tell if this is enough or if I’ll want to further automate the git portions. Since I’m not collaborating with others, merge conflicts happen, but they’re not too frequent. I’m tempted to make a script that can do a complete commit (with message)/pull/push for the most common cases. But I’ll wait until I feel like I need it.

Update 1 month later: Yup, check-repos has worked perfectly. I’m now keeping everything in sync much more regularly. The only thing that still annoyed me was having to cd <repo> ; git pull. It’s a small thing, but with a tiny script, now I can just type pull dotfiles after logging in:

(At first, I started typing "living the terminal life" before I realized how that sounded. I don’t use real hardware terminals anyway, so "pseudoterminal" has the advantage of being more correct as well as not making it sound like I have an incurable illness.)

Being able to live out of a virtual terminal means incredible flexibility because dang near any computer in my house can become a temporary workstation.

It’s also largely what allows me to update my local environment via "dotfiles".

I’ve split this whole topic off into a separate page here: Computer Terminals.

As promised, here’s my entire check-repos script. I’ll try to update this I make any important changes.

Enjoy! And let me know if you have any improvements on any part of my setup. :-)