Like, I imagine, most people, I like music. Other than singing in school choirs, I’ve never done much music creation.

I like to listen to all sorts of different things, depending on mood, setting, etc., but I will say that I usually find my way back to the gigantic, sprawling, and hugely varied "genre" of metal.

Specifically, I like (but do not limit my listening to) these sub-genres (in no particular order):

Here’s a compilation cassette I remember playing many times over in my youth: 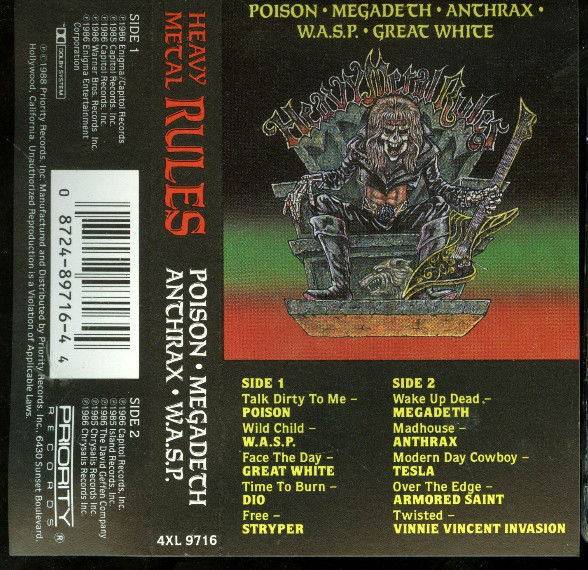 (This image of the Heavy Metal Rules cassette liner came from https://www.discogs.com/Various-Heavy-Metal-Rules-/release/5515086 and looks to have been uploaded by heavymetalmuseum.)

The Anthrax and Megadeth "tracks" stood out even then. But I remember all of these.

I also have strong memories of specific family Christmas albums on vinyl (I am now the caretaker of these and ought to catalog them here at some point) and some rock albums:

Listened to lots of "classic rock" on the radio while growing up: Pink Floyd, Kansas, Chicago, Jethro tull, Led Zeppelin, The Beatles, Queen, AC/DC, The Rolling Stones, The Who, Jimmi hendrix, Creedence Clearwater Revival, The Doors, Tom Petty, David Bowie, Aerosmith…​etc. etc. etc. (List in absolutely NO particular order and I got really into some of these bands at various points of growing up and early adulthood.)

We had plenty of orchestral, symphonic, organ, choir, and soundtrack "classical" music on record.

I also remember these cassette tapes which I either purchased or were purchased for me (in rough chronological order of my memory of how they fit into my childhood/youth):

…​and now I find myself on Bandcamp ( my profile - mostly metal so far) where I’d like to think my money goes to support the artists and a fair distribution system.

Right now, if I can’t get it on Bandcamp, I pretty much don’t buy it - but I’m open to suggestion.